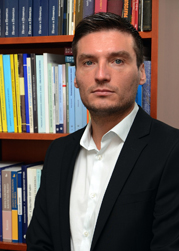 Damir is a 2009 graduate of the Belgrade Law Faculty where he earned his law degree. He initially started his law carrier at a Serbian credit union financial cooperative, gradually moving from a law intern to its general counsel, overseeing a legal department with a predominant in-house debt collection unit.

In this short period of time Damir has established a well-organized Office, with a number of law graduates on staff, whose predominant characteristic is swift and cost-effective debt collection, with a success rate of 70% at the end of 2013.

Damir’s civil and commercial enforcement law practice is regarded by his clients, the Ministry of Justice and his colleagues as an example of good practice. Damir is also involved in law and legal English training.